III. Learning how to Pronounce Chinese

Use Mozilla Firefox for this website and install the free Adobe Flashplayer!

1. You Just Want to Learn How to Speak Chinese

You might soon wonder how the actors create all those different "sh" or "s". So, you might want to have a detailed look at the pronunciation section. Later, you will find out that the Chinese understand you much better when you use the right tones. Then the time will have come to start to pay more attention to the five tones.

2. You Want to Learn How to Read Chinese

Whenever you are ready to learn how to read Chinese, the time has come to find out what a radical is. It is acutally very simple. The Chinese radicals could be compared with the letters of the alphabet. Letters compose syllables and words. In the same way, Chinese radicals compose Chinese characters.

There are about 260 radicals. However, the good news is: With this website, you can learn to read and write at least 50 radicals per day, because every radical is a simple line drawing. Once you see the picture, you know the meaning.

Once you know the radicals, you can tackle the Chinese characters. You will see that every character is a combination of radicals. And then the really great thing will happen: You will discover that the radicals tell you a story which conveys the meaning of the character!

While you learn, you just look at the character and listen to the story. Lateron, when you will see the same character again, the story will pop up in your mind and you will remember the meaning! That is how people learn which can remember up to 80 characters per day!

4. The Connection between the Videos and the Characters

5. Learn in Order to Make Yourself Happy!

A brain which has nothing to learn is like a muscle which never moves. This doesn't feel good. Your brain is made for learning. Without learning, there is no challenge, no inner adventure, no growth in your life. A life without constant learning it like a body without water. It is dry and dead.

To learn something new is like discovering a new land. It is an enrichment for your life. Often it is also an emotional challenge. You meet new thoughts and facts which challenge what you know up to that moment. Sometimes you are eager to see something new time after time. Other times you need to digest what you have seen. You need a pause.

So, go for the challenge and enjoy the satisfaction of growing as a human being! 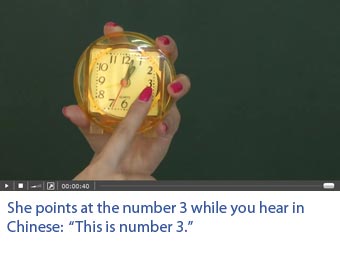 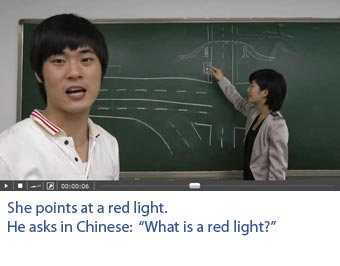 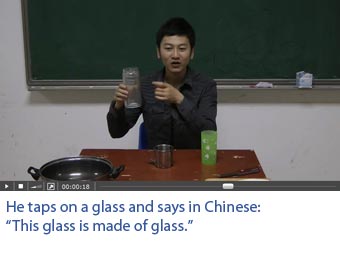 The actors do what they are talking about. So, you often understand without having to look at the translation. With time, you immerse completely in Chinese.

2. What You Find on One Page and How to Learn 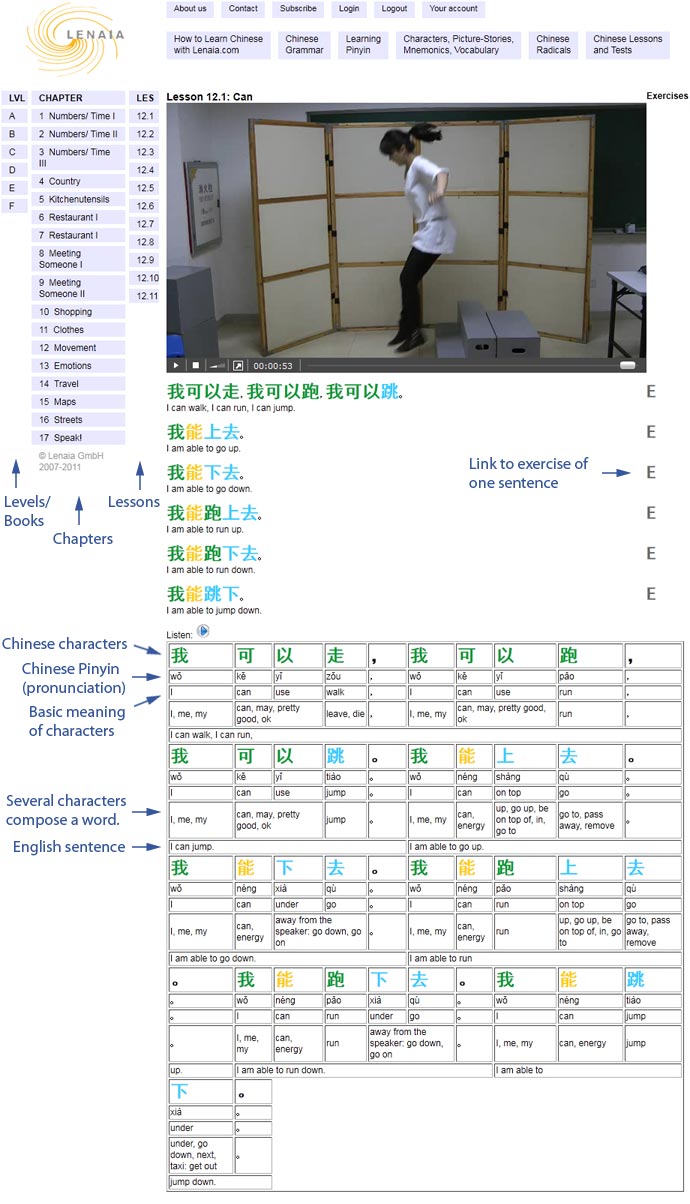 You might ask what the basic meaning of a character is (third row in table)? You find the answer in the section about Chinese words.

3. The Exercise Page for One Sentence

The "E" behind a sentence leads you to the exercises.

These exercises are basically little multiple choice tests. Do the ones which suit you the most.

III. Learning How to Pronounce Chinese

Pinyin is the Chinese phonetic alphabet. It consists of Western letters which are pronounced in a Chinese way. The Pinyin tells you how a character is pronounced. You can learn Pinyin within about one day.

2. What You Find on One Page

2. The Table with the Different Phonetics

The table with all the syllables has four columns. In the first column, you find the pinyin as it is written normally. Yet, this normal way of writing pinyin is an abbreviated form in some cases. This is why we have added the second column which shows you the pinyin in its full form. Some pinyin letters (a, e, i) are pronounced differently in different combinations with other pinyin letters. This is why we have added the column with the international phonetics. This column might not be perfect. Please just note that the vocals (a, e, i, o, u) are pronounced in different ways when they appear in different combinations.

There are a few combinations of pinyin letters in which a pinyin sound is pronounced, yet, the respective pinyin letter is not written. I guess, the Chinese do this because they have an affinity for abbreviations.

(5. Only for Reasons of Completeness: Spelling of Pinyin Letters at the Beginning of a Syllable)

Some pinyin letters are spelled differently when they stand at the beginning of a syllable. The Chinese do this in order to make clear where a new syllable starts.

I is written Y at the beginning of a syllable.

U is written W at the beginning of a syllable.

Ü is written Yü at the beginning of a syllable.

Example: If the phonetic word "pinyin" was written "pinin", one wouldn't know whether the writer meant "pi-nin" or "pin-in". By writing "pinyin" it becomes clear that the second syllable starts at the "i". So, the writer must have meant "pin-in" by writing "pin-yin".

Let us give you a survey in a simple table!

(6. Only for Reasons of Completeness: Indication of the Beginning of a Syllable by a Single Quotation Mark)

In other cases, the beginning of a syllable is marked by a single quotation mark.

1. How to Learn All Radicals within Two to Three Days

When you read Chinese you meet radicals. For example these three:

These radicals are line drawings. Over the centuries, they have been simplified. So, today one can't see the original picture anymore. However, if you add a few lines, can see the picture again.

If you want to keep the meaning in mind for a long time, it helps to write the radicals. Best would be if you wrote them several times.

Your exercise doesn't have to look good at all. The only thing that counts is that you are active!

After having written them you can add the lines which complete the picture.

Because you are active, your mind remembers much longer.

Write some radicals today and complete the picture tomorrow.

Spend 50% of your time with learning new radicals and 50% with repeating. Within two to three days, you will know them all.

2. What One Page of the Radicals Section Looks Like

3. Why this Way of Learning Chinese Radicals Works so Easily

Ideally the grey lines grow from the radicals. In this way, the radical itself is the bridge to the entire picture.

1. To Learn a Character Means to Learn a Little Story

When you read this character, you see two radicals: 人 and 人. So, person and person. Now you think of the story with the two persons. You remember: One person follows the other person. In this way, you remember the meaning: follow.

How can you learn these stories longlastingly?

Even if you only want to learn how to read Chinese, it is helpful to write the characters. I guess, it is because we are active when we write.

You can also just listen to the stories and look at the characters.

You don't need to learn characters. You just have to remember little stories. That is the whole mystery! This is what people do which can remember 50 or more characters per day.

You might ask why all the characters are so colorful? The colors resemble the tone in which the character is pronounced. You find more about tones in the tones section.

2. Idea: Repeat the Characters with a Little Booklet

Print the pdf, make a little booklet, repeat the characters while you are on the move. 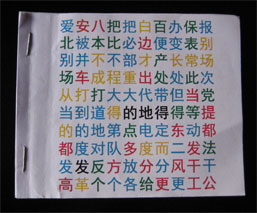 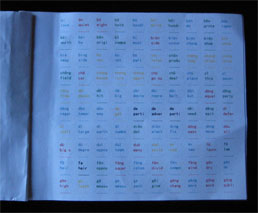 1. The Information Provided in the Vocabulary

You might wonder why we have made groups of words. The idea is this: Once you have learned 400 characters, you can focus on words which are composed of these 400 characters only. In this way, you can broaden your knowledge without getting confused by characters which you haven't learned yet.

1. What You Find on One Page of the Grammar Section

2. How to Learn with the Grammar Section

We have given each Chinese tone a color: Tone 1 is red, tone 2 yellow, tone 3 green, tone 4 blue and tone 5 black.

When Chinese want to emphasize the right tone they pronounce a syllable slowly.

Tone 1 is pronounced evenly and with a rather high voice, a bit like a soprano singer who sings the same sound for a long time while letting it fade. We have chosen the color red for this tone as it fades away like the red sun in the evening.

Tone 2 goes up as if someone was asking something. One can also compare tone 2 to the sound of a motorcycle which accelerates and changes gears. After each change of gears, a new tone 2 starts. We have chosen the color yellow as the sun is usually yellow when it comes up.

Tone 3 falls firstly and then it rises. This is quite strenuous for which reason the Chinese pronounce a distinct falling and rising sound only if they want to emphasize the tone 3. Yet, during an everyday conversation, tone 3 is simply pronounced a bit deeper than the other syllables. So, don't get confused by tone 3. The rule of thumb is: Tone 3 is deep. If you focus on that, you will be well off! We have chosen green for tone 3 as grass grows on the ground.

Tone 4 is short and falling. At the start of a tone 4 syllable, the voice is high. Then it falls quickly as if someone was sighing quickly and vigorously. The blue color stands for water which always flows downwards.

It took us several years to learn our mother language. So, why should we get desperate if it takes us a few hours in order to develop a sense for the different tones in Chinese?

Sometimes Chinese overemphazise tone 3 and by doing so they actually pronounce two tones, a falling one and a rising one with a short pause in between. This way of pronouncing tone 3 is helpful if one wants to make sure that the counterpart definitely hears tone 3. Yet, this is kind of a "street Mandarin". In the following illustration, we show you this way of pronouncing tone 3.

In conversations, the Chinese pronounce the tones shortly and they don't emphazise tone 3.

If another syllabe follows tone 5, tone 5 is kind of a springboard for the tone of the following syllable.

If two syllables in tone 3 follow eachother, the first of the two syllables changes to tone 2. This makes sense as it is quite strenuous to pronounce two tone 3 syllables one after another.

7. For Advanced Students: Tone Changes of 一 (Yī One)

一 (yī one) means "one". This word is quite frequently used in different combinations. The tone of 一 (yī one) changes when it appears in combination with other characters.

As a rule of thumb you might memorize: 一 (yī) is pronounced as yì (yi4) when it is used in combination with another character.

8. For Advanced Students: Tone Change of 不 (Bù Not)

The tone of bù (bu4) changes if another tone 4 syllable follows:

9. For Advanced Students: In Order to Confuse You Competely: 3 Character Phrases

If the characters 一 (yī one) and 不 (bù not) stand between other syllables which belong to the same phrase, they take on the the neutral tone which means that they adopt the tone of the preceding syllable while serving as a kind of springboard for the tone of the next syllable.

The same thing happens to 不 (bù not) if it is part of a three character phrase.

Now, you know all about the Chinese tones and the tone changes. Don't spend too much time on the tone changes in the beginning. Just remember that they exist and don't become confused if you hear a 一 (yī one) or a 不 (bù not) pronounced with a different tone!